My mental illness (diagnosed as depression, anxiety & OCD) has been a shadow following me since I was 12. I remember the first time I thought there might be something wrong was when I started coming home from school at 4, sleeping until 7, eating and then sleeping till morning. No amount of sleep could cure the exhaustion.

It has stuck with me ever since. It has grown and morphed and squeezed into every single aspect of my life despite my best efforts to shield myself from it. It has progressed into a monster that I undoubtedly am no match for.

Now, at 25 I am married to a woman I adore, in a house I love with a dog I can’t imagine my life without. But, my “mental illness” has been worse than ever before. It has manifested into what my family doctor referred to as “probably bi-polar”, and has consumed me entirely as I tried to find ways to cope with it.

I have burnt bridges professionally, lost friends, and questioned my purpose during what I thought was “mania.” I have felt so enlightened and determined that I wrote half of a book in one sitting. A rollercoaster could not compete with the twisty ride my brain was on.

But, the one helping professional who has empowered me and helped me fight for answers is my naturopath. I’ve been seeing her for a year, and in that time, she has dug down to the roots of my being. She has asked questions no doctor ever thought to ask and wanted a full picture of my life (right down to when I go to the bathroom.)

So, when she suggested that I might not actually have a mental illness, but that it is a symptom of a larger problem, I believed she could be right.

She then proceeded to tell me that she wanted me to take a test that tests the hormone, serotonin, dopamine, and neurotransmitters in the body called the Dutch Test
I trusted her. I trusted her wholeheartedly because I so badly needed an answer for why my depression and anxiety/OCD had morphed into this bi-polar like illness that was eating me alive. 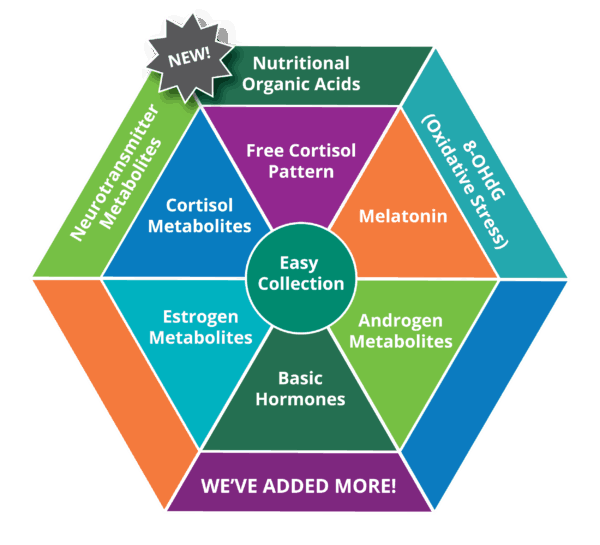 So- I took the test. I peed on little flaps of papers at certain times a day at a certain day in my cycle and then mailed it off in hopes that I would find relief. Nearly a month later, my results came back. I met with my naturopath who had taken the time to analyze the tests and what she told me frightened and enlightened me. “Your mental illness is a symptom of a hormone imbalance.” She also informed me that my serotonin levels, dopamine levels, and neurotransmitters were in the normal-high range. But that all of my basic hormones, including my cortisol, were not.

“THANK GOD” were the first two words that popped into my head. Next were “who am I without it?”

I never realized how heavily I identified as someone who is depressed, who is anxious, who has OCD. I never imagined it could be anything else. So now, I’m here. Sitting with the feelings that accompany my new diagnosis of having a “hormone imbalance” while not letting it have too much power over me (though I cannot wait to get my hormones back to a healthy level.)

For the next while, my posts will likely be about my experiences surrounding recovery & hormone balance, as well as my emotions surrounding this entire experience.